Southwark’s half of the estate comprising 95 council homes in Gillam House, 11-33 Debnams Rd and a council depot, was split into two phases; 4A and 4B. Southwark’s part of phase 4A was redeveloped by Presentation Housing Association, which was then acquired by Notting Hill Genesis housing association. According to the Mayor’s LDD, permission was granted for 33 new homes - all of which social rented housing. Further details of phase 4A can be found in this Executive Committee Item (Item 10) and the Statement of Reasons for the Compulsory Purchase Order.

There is no planning information available on southwark’s planning portal relating to phase 4A and it does not appear in Southwark’s affordable housing audit. The LDD lists the consent under the reference: 06/AP/0394.

This Committee report confirms that Southwark sold phase 4B to Notting Hill Genesis and its development partner Higgins Homes for an undisclosed sum in 2009. Site 4B was home to Gillam House (pictured above), which comprised 57 council flats and 6 council-leasehold flats.

Land registry documents show that the Council sold the land to Notting Hill and its development partner Higgins Homes for the sum of just £2.1 million. 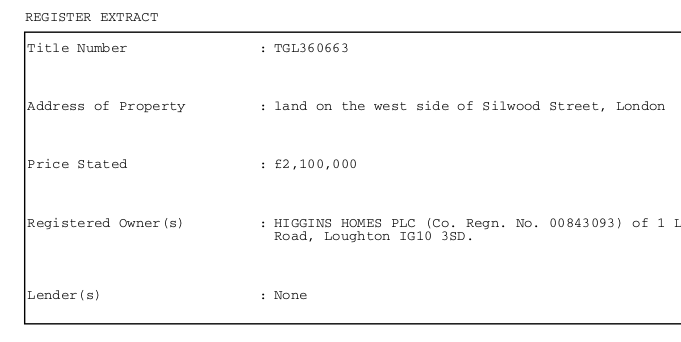 The Land Registry documents and the committee report both confirmed that the Council had signed an ‘overage’ agreement as part of the deal. This means that it would supposedly receive a share of the profits should sale price targets for the private units be exceeded upon completion.

We made an FOI request in March 2016, asking how much overage the Council had received. The Council responded that it was “able to confirm that £546,047 was received in September 2014, but a further overage payment is currently being negotiated.” The officer’s report for Notting Hill’s planning application for site 4B, confirmed that the block would be replaced by 127 new homes of which 22 would be social rented.

However, the Section 106 legal agreement signed with Notting Hill defines social rent such that it includes affordable rent (i.e. up to 80% market rent).

We wrote to Notting Hill asking whether these 22 units were currently being let at social rents or affordable rent. They didn’t reply and have not responded to follow up requests.

We since discovered that the 22 ‘social rented’ units are listed in the GLA affordable housing database as affordable rent and have included this scheme as part of our complaint to the local government ombudsman.