The regeneration plans split the Elmington estate into 10 blocks (A-J), of which it was decided that the (predominantly high-rise) blocks F, H, I and J would be refurbished and the remainder redeveloped. Phase 1 was completed in 2006, it comprises 136 new council homes which are of questionable design and build quality - despite winning awards. This article by Building Magazine claims that tenants should ‘regard themselves as quite lucky. For in place of dreary high-rise living, they now have human-scale housing that includes and abundance of colour, form and detail’. However, a few years on and the abundance of colour appears to be flaking off to reveal a somewhat shoddy build quality. We wonder how long it will be before these too are condemned for redevelopment..

Phase 2 comprises sites A and B, which are being redeveloped By Notting Hill Housing Group, where planning documents confirm that it has demolished 294 Council homes and is replacing them with 279 homes and 117 car parking spaces in a ‘mixed tenure’ development that it has branded Camberwell Fields. 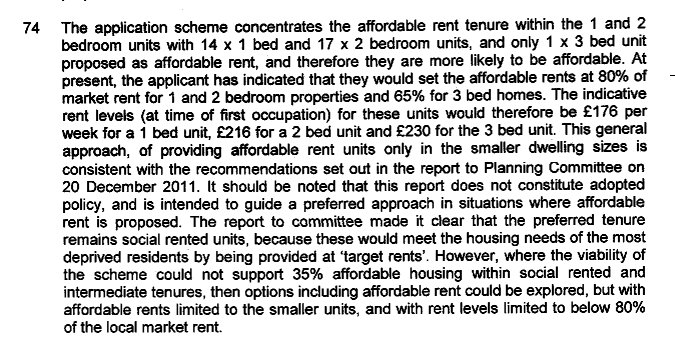 The departure from the Council’s policy requirement of providing (truly) social rented housing was justified by Notting Hill’s submission of a viability appraisal, which pleaded development poverty. The planning committee report reassured the committee that the viability assessment had “been scrutinised by a Property Valuer on behalf of the Council” and that “the Valuer concluded that the appraisal was generally sound.” - (para 75). However, the GLA report for the application said that “Southwark Council is assessing the viability appraisal in house.” (para 32)

Having made promises of a ‘right to return’ to former tenants, this Council report flags up the problems associated with the higher rent levels proposed. It acknowledges discretely that tenants may not be able to exercise their right to return because the replacement housing may not be ‘tailored to their housing needs’.

Phase 3 involves the demolition of 144 council homes (of which 31 leaseholders) and a number of existing Elmington blocks which have been refurbished (blocks F,H,J & K). In July 2012, the Council’s Cabinet resolved to sell remaining sites C,D,E and G to developer Bellway Homes on the basis that replacement 1&2 bed ‘social’ housing would be affordable rent, capped at 65% market rent. These will be managed by Family Mosaic - a housing assocation that features in our list of those who have delivered affordable rent instead of social rent approved in the planning consent.

In Oct 2012 the Council’s Cabinet resolved to issue a Compulsory Purchase Order on remaining leaseholders and tenants on phase 3 (Sites C, D, E and G). In 2014 the Council approved the following planning applications for these sites.

In 2015 the Council served the Compulsory Purchase Order on Site E and submitted its Statement of Reasons to the Secrectary of State.

Tenants and leaseholders are currently being ‘decanted’ i.e. evicted from these phases ahead of demolition. Tenants are still being promised a ‘right to return’ to the new homes, but are not being told that the replacement ‘social’ housing will be three times the level of Council rents. Leaseholders are being offered shared ownership deals on the replacement homes, but the rent and repayments on these requires a minimum household income of at least £50k. The costs vs the benefits

In 2009, the Council estimated that refurbishing the estate would cost a total of £10m.

By 2016, the Council had spent £6.5m just on decanting and demolishing sites A&B.

Some Land Registry deeds show that the Council has sold off some parcels of land in sites A&B to Notting Hill for just £1.

Other Land registry deeds suggest that the Council has sold the largest parcel of land in sites A&B to Notting Hill for £11m.